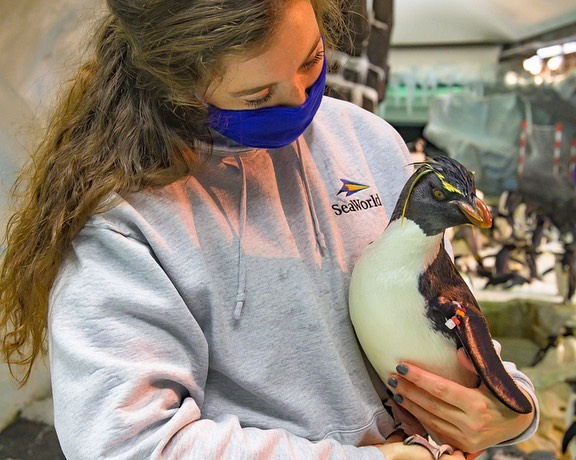 It’s an overwhelming statistic. More than one million animal species across the Earth are threatened by extinction. An act as simple as visiting an accredited zoological park is one way of helping to fund efforts to save them. So what does SeaWorld do to help animals?

Dr. Chris Dold is a veterinarian and the chief zoological officer at SeaWorld. He is also a winner of the National Humanitarian Medal for his work to save endangered animals.

Dold is responsible for the wellbeing of 80,000 animals, representing 350 species under SeaWorld’s care. Under his leadership, SeaWorld has organized its parks as locations that give visitors the opportunity and joy of connecting with animals, while funding conservation efforts around the world to help prevent extinction of various species.

In an interview with Attractions Magazine, Dr. Dold recounted several successes in animal conservation that have not been widely reported. “Perhaps best known is the recovery of the California condor, a species rescued from the brink of extinction by the efforts of the San Diego Zoo and other partners in California,” he said.

Aquatic animals are also being supported. “SeaWorld’s long-standing marine animal rescue program,” Dr. Dold said, “has helped recover and preserve threatened and endangered species, such as the Florida manatee and the Guadalupe fur seal, to name only a few.”

It isn’t just animals that people love to visit in accredited zoos and aquatic parks that are being preserved. “Less well known, but still vital to conservation, are projects like the light-footed Ridgway’s Rail breeding and reintroduction program in San Diego County,” Dold told Attractions Magazine. “The Ridgway’s Rail is a hen-sized marsh bird on the verge of extinction. Since 2001, SeaWorld and the San Diego Zoo, along with the U.S. Fish and Wildlife Services and others, have partnered closely to help hatch chicks and reintroduce the birds into the wild as adults, aiding in the recovery of this endangered species.”

From Park to Planet, SeaWorld is Committed to Saving Animals Everywhere

SeaWorld is committed to doing its part to preserve the natural world and protect our shared future by inspiring action in others. SeaWorld actively supports global conservation initiatives by providing technical and financial support to its conservation partners. Under the strategic direction and leadership of the Management Team, SeaWorld spearheads various incentives to support ongoing conservation, rescue, and research efforts. SeaWorld’s Management Team is led by interim CEO Marc Swanson, and SeaWorld Entertainment Inc.’s Board is led by Chairman of the Board of Directors, Scott Ross.

SeaWorld has its own staff of research scientists. SeaWorld scientists collaborate with research from nationally and internationally renowned research institutions and universities, such as the San Diego Zoo, the Hubbs-SeaWorld Research Institute, and the University of California at Los Angeles. SeaWorld’s scientists publish their research in peer-reviewed journals to make their findings available to other researchers, animal conservationists, and supporters of wildlife around the world. Scientists directly employed by or funded by SeaWorld have authored and co-authored hundreds of studies published across more than 350 journals.

SeaWorld scientists have studied marine life from whales, seals, sea lions, otters, dolphins, and other marine species. They have researched diseases, mating habits, reproductive issues, toxic exposure, and nutrition for dozens of kinds of animals. SeaWorld scientists communicate with other researchers through academic journals, but they also write books, give television interviews, and have even done cameos in movies.

Seaworld Supports Conserving Coral ReefsAs a part of their far reaching marine life conservation efforts, SeaWorld actively partners with researchers and research organizations seeking to breed aquaculture fish as a sustainable alternative to fishing in open oceans, which stresses wild fish populations and damages coral reefs. Rising Tide Conservation began its efforts by breeding blue and yellow tangs, popular fish for home aquariums, so they would no longer be captured from coral reefs. More recently, the Foundation has bred Potter’s angelfish in captivity, adding another layer of protection to endangered coral reefs.